The case for community based management

Across the globe, we are witnessing unprecedented and often violent scrambles for natural resources. Environmental activists and land rights defenders are increasingly under attack. Few of these activists have access to media platforms to share their stories.

The murder of Htay Aung in 2017 in Myanmar, Isidro Baldenegro of Mexico who died in January 2017 for defending forests of Sierra Tarahumara, the fight for pastoral land targeted for luxurious safaris marked by the harassment and arrests of Ms. Maanda Ngoitiko in Tanzania... the depressing list goes on.

Yet, even while these activists are dying, we are now confronted with the reality that their missions were to protect all of us. A wake up call has come from the Intergovernmental Science-Policy Platform on Biodiversity and Ecosystem Services (IPBES) in the Global assessment report on biodiversity and ecosystem services. The report presents the alarming reality of the fast-paced extinction of species across the biodiversity spectrum. Professor Settele notes in the report:

“Ecosystems, species, wild populations, local varieties and breeds of domesticated plants and animals are shrinking, deteriorating or vanishing. This loss is a direct result of human activity and constitutes a direct threat to human well-being in all regions of the world.”

The Agenda 2030 and Sustainable Development Goals

The Sustainable Development Goals have been hailed as the world plan of action for people, planet and prosperity. They speak to the woes of both humanity and the planet, promoting a holistic approach to development. What we need to achieve them is a complete paradigm shift in international development. Development that is not driven by the bottom line, increased incomes and consumerism.

But how much has this shift happened since 2016? Evidence shows that it's pretty much business as usual.

In Tanzania, the Maasai community of Loliondo has been resisting pressure by the government to lease their land to a private company for hunting purposes. The militarised government response to community resistance raises concerning questions. In whose interests is the government serving? Similarly in India, the supreme court ordered the eviction of over 7 million indigenous and tribal peoples from their forests. The court regarded them as squatters on their own ancestral lands. All this despite being in violation of the government’s own law: the Forests Rights Act of 2006.

The Cerrado ecosystem in Brazil is also under attack. This is the second largest of Brazil's major biodiverse habitat, after the Amazonian rainforest. The agribusiness sector is advancing into the biome and causing rapid devastation. Agricultural, cattle-raising and mining frontiers have expanded into the Cerrado. This has led to the degradation of 52% of the land over the last four decades, often with full vegetation loss. The biome is under imminent threat, as well as the livelihoods of those traditional communities. Yet the complete inaction on the parts of the government, landowners, and agribusinesses is worrying.

The expansion of palm oil agribusiness in the northern region of Guatemala has been blamed for several environmental disasters. The contamination of the Pasión river in Sayaxché Petén in 2015 caused the disappearance of aquatic species. All this exacerbates the conflicts related to access and use of water. It also puts at risk the food security of several smallholder farmer communities.

The IPBES acknowledges that land resources managed by indigenous peoples and local communities are under increasing pressure. The findings echo that of the Missing pathways to 1.5°C report on the role of the land sector in ambitious climate action. That report says one of the best strategies to address climate change is through strengthening indigenous and community land rights.

A greater need for free, prior and informed consent

Ecological crises affect most those who are least responsible for causing it. These are often communities whose livelihoods directly depend on such ecosystems. Many environment and human rights defenders are from communities that are most harmed by their destruction.

ActionAid has been demanding justice and protection of the human rights defenders affected in the areas where we work. We know that conservation is best achieved through supporting environmental rights defenders. We need deeper involvement from communities who are dependent on natural resources if we are to defend them together. 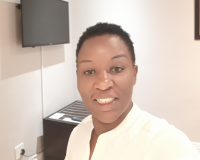 Catherine Gatundu is a policy advisor in the area of livelihoods, based in Nairobi.