The abuse of corporate power

Transnational corporations are growing in power.

All over the world, this is often affecting the ability of citizens and governments to protect human rights. Corporate manipulation of legal processes and international agreements has tried to silence activism.

So civil society organisations are working together to push back.

In France, ActionAid/Peuples Solidaire is part of a campaign ‘On ne se taira pas’/'We will not be silent'. This campaign challenges the use of malicious prosecutions, or SLAPPs, to prevent exposure of human rights abuses by companies. And in Denmark, ActionAid/Mellemfolkeligt Samvirke is part of the 'Stop ISDS' alliance to challenge parallel and unfair justice systems for corporations.

‘On ne se taira pas’, (‘We will not be silent’) is the response to being pursued by big corporations for denouncing abuses of human and environmental rights in France. Coordinated by the Centre de Recherche et d’Information pour le Développement (CRID), it's a large coalition of NGOs, academics, lawyers, journalists, bloggers, whistleblowers and other concerned citizens.

A SLAPP (Strategic Lawsuit Against Public Participation) is a gag lawsuit that aims to intimidate critics. The strategy is to impose the costs of a legal defence until critics abandon their opposition, even when it is clear that the case is weak. The primary goal is not to win the case but to silence opposition.

SLAPPs take many forms, but the most common is a civil case for defamation. In these cases the burden of proof is on the defendant to prove that an opinion published is not libellous. The use of such orders has gone far beyond seeking ‘token’ damages to challenge reputational damage. It's about claiming for massive amounts of money – amounts that would mean the organisation needs to close down entirely.

These actions involve abuses of power and processes. They exploit the inequality of financial and human resources available to a large company compared to an individual, a journalist or civil society organisation.

This video from CRID explains the concept of ‘poursuites baillons’, gag lawsuits and how they are being abused in France. It also tells how inspiration to challenge them was found in Quebec, where activists fought for and won a law to defend their freedom of expression. 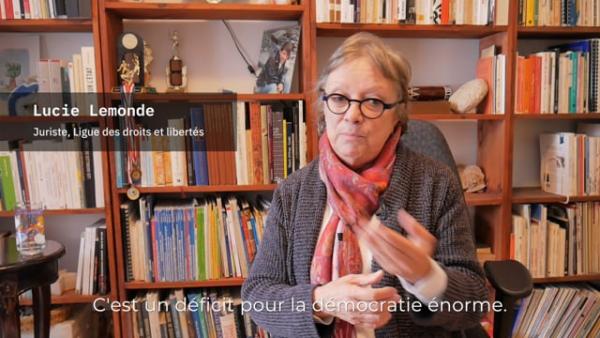 Examples of these kinds of prosecutions include the more than 20 proceedings initiated by the Bolloré group against various media outlets. These outlets were exposing land grabbing by subsidiary palm-oil plantations in Cameroon and other activities in African countries. Such scattergun approaches have become known as ‘slapshot’ prosecutions.

Even if the prosecution is sure to fail, it can cause massive disruption as documents and computers may be seized for examination, quite apart from the financial and human costs. Sherpa, a Paris-based organisation established to protect and defend victims of economic crimes, has been faced with actions by construction company Vinci. Sherpa had exposed abuses in the working conditions of migrant workers employed by Vinci and its subcontractors on Qatar 2022 World Cup construction sites.

This video explains how SLAPPS have been used in this case and others in France and the need to continue to demand action for change.

In some jurisdictions, especially where freedom of speech is an explicit constitutional right (US, Australia) anti-SLAPP laws have been passed to quickly throw out malicious prosecutions and even hand out fines to perpetrators. But in some cases these laws have also been repealed under pressure. It is a contentious area, pitching freedom of speech against the right to demand damages for reputational damage.

The ‘On ne se taira pas’ coalition continues to fight for an anti-SLAPP law in France. Their website is a valuable resource with many case studies and news about the campaign. Without a mechanism to prevent the rich and powerful from using the law to intimidate and shut down activism, their operations will never be fully accountable.

The power of these corporations is visible in their ability to hamper national governments. They can be seen controlling government activities using a parallel judicial system. ISDS, Investor to State Dispute Settlement, is often embedded into international trade treaties.

Like SLAPPs, targeted at individuals and organisations, ISDS can dissuade a government from even challenging a corporation for fear of the potential costs. For example, a fossil fuel company is suing Canada for US$250m over Quebec’s moratorium on fracking. The Sierra Club (a US environmental organisation) reports:

NAFTA’s chapter on investment gives foreign corporations the right to sue a government over laws and policies that corporations allege reduce their profits or, in Lone Pine’s words, reduce the “expectation of a stable business and legal environment.” When a new policy or regulation is put in place that a corporation doesn’t like, it can bring the government to a private trade tribunal where the case will get heard by three private sector attorneys, behind closed doors, for taxpayer compensation.

Attempts to introduce new laws to protect the environment or citizens from harm (e.g. over tobacco advertising) are vulnerable to such attacks. Even in cases when arbitration finds against the company, the costs to government can be high. This drains resources that could otherwise be used for public services. In 2016 the Guardian reported on Philip Morris taking such action in Uruguay. This kind of action has a chilling effect on introducing regulation for the public good.

The StopISDS coalition is an alliance of over 200 European organisations, trades unions and social movements. They're campaigning for an international approach to preventing this abuse of power. They are calling for a legally binding UN treaty on transnational corporations and human rights, as well as EU regulations to hold corporations accountable. The recent EU elections provided an opportunity to raise the issue with candidates and decision makers.

Recent decades have seen the increasing power of corporations to silence dissent. They can even curb the ability of governments to regulate their activities.

It has become ever more clear that the activities of some companies are a major cause of global inequality and threaten the long term viability of the environment and biodiversity we all depend upon. It is a priority for civil society to come together to find the strategies to confront and restrain this abuse of power.