This piece was written by Karen Hansen-Kuhn, Institute for Agriculture and Trade Policy (Washington, DC) and Catherine Gatundu, ActionAid International

You might be surprised to learn that while we’re all sheltering in place and wondering what comes next, trade negotiations that could set labor, environmental and climate rules for decades to come are moving forward. The U.S. Trade Representative (USTR) has announced plans to negotiate a free-trade agreement with Kenya. This would be the first free-trade agreement the U.S. has negotiated with an African nation.

The COVID-19 pandemic has sparked some important new conversations about how to ensure access to food, some more sincere than others. In the U.S., meatpacking companies assert that they are essential industries and must be allowed to operate despite coronavirus outbreaks among their workers, neatly omitting the fact that they have millions of pounds of meat in cold storage. Breakdowns in supply chains all over the world have exposed the fragility of systems dominated by just a few major corporations. While solutions must involve strengthening and diversifying local food production, trade in agricultural products – especially countries like Kenya that still depend on food imports – will remain an important part of the equation.

Getting trade rules right matters. But trade agreements govern much more than exchanges of food or other products. The rules set in recent deals like the United States-Mexico-Canada Agreement (USMCA) limit governments’ abilities to regulate risky pesticides or agricultural technologies or to shelter local production from volatile prices or supplies. After intense pressure from civil society and the U.S. Congress, the final USMCA left out unfair new patent protections on innovative biologic medicines, but there is every reason to believe those proposals will reemerge in other trade talks, potentially including this agreement with Kenya.

Kenya already has access to most U.S. markets under the African Growth and Opportunity Act (AGOA). We could certainly argue about the harsh economic conditions for participation in that agreement, but it does provide unilateral access to U.S. markets for many African exports. Given the economic disparities between the U.S. and Kenya, it seems extremely risky to insist on opening Kenya’s market indiscriminately to U.S. goods. But that is exactly what various U.S. companies are demanding in their comments on negotiating objectives for this deal.

More than 5,000 organisations, companies and individuals submitted comments on the negotiating objectives for the U.S.-Kenya FTA. The Institute for Agriculture and Trade Policy (IATP) and the National Family Farm Coalition (NFFC) submitted comments calling, first of all, for the suspension of talks during the pandemic. In fact, ActionAid, IATP and NFFC joined more than 400 organisations around the world to call for a halt in all trade talks until the COVID-19 emergency has passed.

In IATP and NFFC’s comment on the U.S.-Kenya deal, we also insisted that the AGOA benefits be made permanent. If the talks do continue, we insisted that they omit rules that undermine food sovereignty, rural economies and efforts to address climate change.

The African trade network SEATINI also submitted comments, including one on the potential of a U.S.-Kenya deal to undermine the East African Community, an important regional effort at economic integration. All comments are available at regulations.gov and provide a useful overview of who’s asking for what in these trade talks.

USTR has also stated what it sees as problem areas in its annual National Trade Estimate Report on Foreign Trade Barriers. The section on Kenya lists restrictions in the Kenyan constitution banning foreign ownership of land as an investment barrier (somehow ignoring the fact that six U.S. states have similar restrictions). Kenya has a painful history of land grabs, including by foreign investors, that have robbed local farmers and their families of their homes and lands and undermined food production for the sake of speculative land investments. Immovable property and related property rights are included as a form of investment in USMCA and other U.S. free trade agreements, subject to binding dispute settlement.

The question of foreign ownership of land in Kenya has a long history dating back to colonialism, which resulted in foreigners acquiring large swaths of land for a song and on ridiculously long leases of 999 years. The land debate was one of the main reasons the negotiations for a new constitution became a protracted 20-year battle. Communities whose land was leased for 999 years, had neither been compensated, nor consulted, and the demand for redress resulted in the compromise reduction of the lease period for up to 99 years. This is included in both the 2010 constitution and the 2009 National Land Policy.

The process the USTR, in its trade report, now calls cumbersome and opaque is anything but. The constitution requires public consultation on such matters as large-scale land acquisition. It actually falls short of requiring Free, Prior and Informed Consent, which would better protect communities dependent on the land. This is the practice in most countries around the world and is also provided in most international instruments such as the Committee on World Food Security’s Voluntary Guidelines on the Responsible Governance of Tenure of Land, Fisheries and Forests in the Context of National Food Security (VGGT) and the African Union’s Guiding Principles on Large Scale Land Based Investments in Africa.

Land, like food, is not just one more commodity to be bought and sold. It is the basis of livelihoods, cultures and communities. Land or real estate should be excluded from the definition of covered investment in any trade agreement. National-level land tenure reforms must be driven by national-level democratic institutions, with an extensive process of community-based consultation with rights-holders, and in line with international law and standards such as the VGGT and the United Nations Declaration on the Rights of Peasants and Other People Working in Rural Areas, which Kenya has endorsed.

In the U.S., this agreement would mainly serve to lock in an approach to trade that would carry over to future administrations. In Kenya, the stakes are even higher.

ActionAid USA's response to Trump's statement on cutting WHO funding 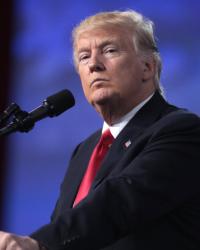