Climate change in the rural region of Isiolo in central Kenya, is making farming unbearable.

The rains have become erratic. Strong winds are constantly destroying farmland and buildings, while transferring diseases that destroy crops.

Elizabeth Ebei, 25, is a smallholder farmer in Isiolo.  Like many other famers in her community, she says climate change is severely affecting her livelihood. She depends on smallholder farming to feed her family and make extra money that enables her to send her children to school.

The mother-of-one says that water remains the greatest challenge as the rivers are running dry. As it becomes scarce, women and girls travel further each day to find this most precious resource, needed for drinking, cooking and cleaning.

As the landscape change and natural resources become scare, a new problem develops. Elephants from a nearby nature reserve are trampling farmland and causing damage to crops.

“Climate change is pushing elephants into people’s farms. The animals are looking for pasture that is no longer available on the mountains,” she says.

She says that rains used to come in April, August and December, but people can no longer plan on when the right time is to plant their crops.

“Years back, we used to plant maize and beans and we were clear on the planting season but now it is not predictable,” she says.

Elizabeth has now moved her farm to a different area, Meru. “I’m now farming tomatoes and onions and they are doing well. The last time I planted tomatoes in Isiolo, they were destroyed by elephants and strong winds,” she says.

“Since I moved my farm to Meru, my income has increased and from that, my child is going to school.”

Elizabeth received training through ActionAid Kenya’s Sustainable Resilient Livelihoods project. This covered agroecological, climate resilient farming methods, which work with nature, use organic fertilisers and reduce emissions.
She has received also training on how to save and loan money through the Village Savings and Loan Association (VSLA). She is a member of Maiyan Women Group VSLA.

Through the group, Elizabeth was able to take a loan of Ksh.30,000 ($300) which she put into her farm and from that she has sold more produce, made profit and paid back the loan.

ActionAid built a water storage system for Elizabeth’s community and supported her to create a kitchen garden where she plants vegetables for her family.

“Before ActionAid built the dam, I used to fetch water from the river but now I can store water, which I use in the household and for farming. Having the water close by has helped me increase my income since I have managed to sell my produce at the market.” she adds. 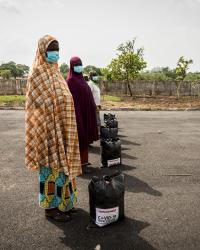