In November 2018, our team in Bangladesh organised a Citizens’ Tax Tribunal in Dhaka. The tribunal aimed to provide a platform for people to express their grievances about the burden of VAT and corporate tax avoidance. It was a space for ordinary people to speak out and to get their stories covered in the media.

In Bangladesh, there is a provision in the tax law for ensuring access to justice to taxpayers through the Taxes Appellate Tribunal. As the people contribute significantly through indirect taxes, VAT in particular, but do not fall within the formal personal income tax system, it is difficult for them to express their grievances through this Tribunal.

Given this systemic problem, the idea of Citizens’ Tax Tribunal evolved to provide an alternative space to share the stories, generate a debate on the implications of tax on ordinary people and draw the attention of the policymakers.

Citizens’ tax tribunals were held in November 2018. They were divided into two hearings - the first hearing included four topics, looking at the implications of VAT for:

The second hearing included two topics, looking at the impact of corporate tax avoidance on:

Participants in the tax tribunal were divided into four groups: people giving testimonies, amici curiae (people providing expertise who aren’t directly involved), participants and jury. Testimonies were given by a range of people; including people living in slums, students and micro-entrepreneurs. The amici curiae group provided information, expertise and insights on the key issues. The participants in the people’s testimony group contributed to shaping the recommendations and consisted of approximately 400 people representing government, corporates, academics, CSOs, the media, and urban and rural areas. Finally, the jury panel analysed the discussions and demands of the other three groups and made recommendations to policymakers and duty bearers based on their analysis.

Fatema Akter, who lives in Korail slum in Dhaka, said that people living in slums fuel the city by serving as drivers, cleaners, rickshaw-pullers and domestic workers:

“We pay rent and we pay for the electricity and water. We pay VAT for cosmetics, toiletries, medicine and medical tests. The VAT is imposed on electronic money transfer and even when we use mobile phones. We vote during elections, but we have limited access to basic public services.”

To ensure that the issues raised by people at the tribunal were shared widely, ActionAid started a journalist fellowship programme in Bangladesh. We provided fellowships to nine journalists who wrote articles on tax issues in the period leading up to the hearings. The journalists’ articles helped to raise public awareness on tax issues and also provided useful background information for the participants at the citizens’ tribunal.

The citizens’ tax tribunals created a forum for people living in Bangladesh to talk freely about tax issues. They were able to share their feelings, experiences and attitudes on the topics covered. The tribunals created a place for people to come together and discuss issues around tax and therefore supported people’s mobilisation. Some of those who took part are now working together to fight injustice in the tax system, supported by our team in Bangladesh.

Following this success, we plan to repeat the project in 2019. It has also inspired other civil society organisations in Dhaka to use similar methods to raise awareness about tax.

The project was made possible thanks to financial support from DANIDA.

A report that opens doors 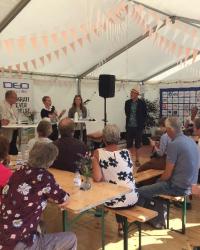