Our in-depth research and awareness raising on public resource mobilisation in Burundi has led to progressive tax reforms.

Burundi is one of the poorest countries in the world, with almost 75% of the population living below the poverty line.

Domestic resource mobilisation is how a government raises money at country level through means like taxes or revenue from mining. It has consistently accounted for less than half of the country’s annual budget, with the rest coming from aid and loans. The budget situation has worsened in recent years as a result of the global economic crash, a fall in commodity prices and the political crisis of 2015 (which also led to a decline in external support).

In response, the government has raised taxes, adding to the pressure on already vulnerable groups. At the same time, it has handed out tax and other economic incentives to large corporations in the hope of increasing foreign investment.

However this has not translated into an increase in productivity or improved living conditions. Public services remain desperately underfunded.

It was in this context that our team in Burundi launched a study on domestic resource mobilisation. The study was led by a former finance minister, who knew the sector well and could access reliable and recent data.

We highlighted the problems of tax dodging by large companies and wealthy elites, and proposed ways of improving tax collection and management. A large part of the tax incentives granted by the government, especially those for telecom and hotel companies, had been misused or diverted. We also discovered dubious corporate practices and exposed loopholes in the legal system that allowed importers and exporters to dodge tax.

The study demonstrated the unfairness of Burundi’s tax system, in which 73% of government revenue comes from VAT and personal income taxes levied on public servants and a narrow group of private sector employees.

We shared the results of the study with a group of over fifty high-level officials from the Ministry of Finance and the Tax Revenue Authority as well as opinion leaders including academics, journalists and civil society representatives.

In a public dialogue held by ActionAid, the participants divided into small groups and were able to debate the issues in depth. The discussions were later opened up to include businesses representatives, who shared concerns ranging from a low tax morale and barriers experienced by tax payers to common practices relating to profit shifting and corruption.

After the study was released, the media launched a public debate raising questions about budget transparency and fairness. The release provoked a very negative reaction from the government, which included the immediate suspension of work permits for Actionaid’s expatriate staff. Intelligence services began to scrutinise what was behind the our work.

So we changed our strategy. We strengthened awareness raising activities and made clear the focus on taxpayer mobilisation for more and fairer tax, especially regarding the political elites’ interests.

Since then the public debate has flourished.

The government, including the President, started to denounce tax dodging by companies and threatened sanctions. The same warnings were raised by the President of the Senate in 2018, when official figures estimating annual tax revenue loss at around US $81 million were released.

In this more favourable setting, our team in Burundi organised a meeting between government officials and civil society and media representatives. This new dialogue has led to the government deciding to abandon flat tax rates on vehicles and scale up more progressive taxes on property and fuel.

The Burundian Revenue Authority, a semi-independent government service, began to take measures to pay back taxes on diverted exemptions that were granted to private business companies, especially in the hotel and restaurant and telecommunication sectors. The campaign for transparency and fair taxation has continued at local and national level, including monthly meetings between the revenue authority and the representatives of the big taxpayers.

Two CSOs supported by ActionAid are now closely tracking tax dodging, OLUCOME and PARCEM. OLUCOME showed in 2018 that tax losses due to unnecessary incentives and other exemptions granted to companies and elites have been estimated at an average of US $ 147 million per year – that’s 20% of foreign aid.

In 2019 and onwards we aim for further reforms for a more progressive and effective tax system in Burundi.

ActionAid Burundi’s work on tax justice has been supported by funding from DANIDA. 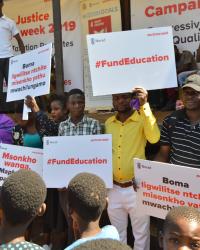