As 2020 draws to a close, the notion that the Covid-19 pandemic is reversing decades of development progress has become conventional wisdom. But the speed and scale at which gains on women’s rights and protection, poverty, hunger and education have unravelled shows us how alarmingly fragile our societies have become after decades of austerity and environmentally destructive free market policies.

But if there’s anything this year, defined by unprecedented challenges and uncertainty, has taught us, it’s that we can act quickly and decisively in the face of global health and economic crises. We’ve seen governments, including the UK, introduce new social protections, such as furlough schemes to try to protect workers and businesses, world leaders agreed debt relief for developing countries and scientists have developed safe and effective vaccines in less than a year.

Speaking at a joint virtual conference on the pandemic in developing countries, held by the International Monetary Fund (IMF) and the UK’s Foreign Commonwealth and Development Office yesterday, was an opportunity to set out how we must build on these progressive measures and achievements to create a just, green and feminist recovery from the Covid-19 crisis. One which will prepare us for the even graver, existential threat of the climate crisis.

With the IMF’s managing director, Kristalina Georgieva, as a fellow panellist, it was also a chance to raise our concerns that the international financial institution is risking huge setback in development by continuing to push austerity measures during the pandemic.

Covid-19 has shone a spotlight on the fault lines in our society, worsening inequality and further entrenching poverty. And there are deeply worrying signs that governments are not learning from this. They are planning recoveries that will leave the world’s poorest people behind and keep us locked into an economic system that is propelling us towards irreversible and catastrophic climate change.

Development finance and aid can be powerful triggers for change. Yet, the UK government has said it will cut around £4billion from its aid budget next year. Thousands of lives could be lost, and the cut will have a huge impact on people who are most in need, especially women and girls who have been hit hardest by the Covid-19 crisis. 2021 should have a been a year of the UK leading global cooperation to tackle the pandemic, prevent gender-based violence and step up the fight against climate change, but instead it is turning its back on those most in need.

Research by UN Women finds that the pandemic could set gender equality back by 25 years. Citi predicts that almost 45 million people will lose their jobs in the sectors worst affected by Covid-19, and over 70% of them will be women. Soaring unpaid care burdens and a shadow pandemic of gender-based violence, which has soared during lockdowns, are undermining women and girls’ safety, chances of a good education and decent work.

This shows how our whole economic system is broken. Free market economics is like a house of cards that collapsed when the pandemic struck. These policies may have brought growth, and in some cases reduced income poverty, but fundamental inequalities based on gender, race, and class were left untouched, and when the crisis hit, shallow gains were quickly reversed.

Income inequality in developing countries, which before the crisis was already bumping up against the threshold that the UN considers dangerous, is set to rise even further, according to IMF modelling.

Yet ActionAid research shows a danger that conditions attached to the IMF’s pandemic lending will force countries to return to austerity and public sector wage bill constraints, when exactly the opposite is needed. As countries recover from Covid-19 and we prepare for an even bigger crisis – climate change – it is critical to rebuild public services, expand social protection, create decent jobs, and tackle gender inequality.

In normal times, austerity economics make the IMF’s loan programs an obstacle to development and human rights; in Covid-19 times, it threatens to plunge countries into years of suffering and depression – a new ‘lost decade’ for development, as many, including the IMF itself, have warned.

Debt relief was promised to the poorest countries at the start of the pandemic, but we know that this did not go anywhere near far enough to stave off the looming debt crisis threatening Africa. As Zambia has become the first African country to default on its debt since the start of the pandemic, and amid fears that other heavily indebted countries could soon follow suit, the IMF, the UK and other G20 countries must throw their weight behind far-reaching debt cancellation.

If we’re to build forward fairer and greener, the IMF and other development partners must work together to help countries transition to resilient economies that can weather pandemics, increasingly severe and frequent climate disasters, and decarbonisation. This means a major pivot from austerity policies to massive investment in gender responsive public services, social protection and eco-friendly farming techniques known as agroecology.

Women and girls are on the frontlines of the pandemic and the climate crisis and are disproportionately affected by their impacts. Donors and international financial institutions must listen to women’s rights organisations, particularly local movements and their expertise and experience, to support their role as those best placed to deliver systemic and long-term change. 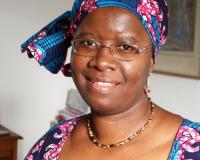