Companies like Shell and the rich countries that have historically done the most to cause climate change will only take responsibility if people, ordinary citizens, join forces to pile on the pressure.

That’s why the legal action against Shell, which launched in the Hague last week, is a great start. I’m one of more than 17,000 Dutch citizens who signed up as co-plaintiffs in the case.

Our challenge is that the fossil fuel industry only sees the dollar signs, they are putting their profits before people and the future of our planet.

Sometimes that makes me feel scared, do they really not care if we live or die? I wonder how the people that run these companies sleep at night, knowing that they are responsible for destroying so many lives. How can you sleep peacefully knowing that you hold the power to change that? That is something I will never understand.

I found out about the climate case from Milieudefensie (Friends of the Earth Netherlands) at a silent walk for victims of oil spills in the Niger Delta, where more than 40,000 people have seen their fishing waters and farmland destroyed. I’m mixed race, Dutch-Nigerian, so I feel very connected and angry about what happens there. It’s like Nigeria is being drained for European benefit, but it is the poorest people who suffer and pay the price.

I’m proud to be part of the legal action against Shell. A company as big as Shell should be held accountable for their actions and take responsibility for the harm they cause.

We have such easy access to information now, people cannot close their eyes to what is happening around them.  They know it is ethically wrong for companies to say they support the Paris Agreement, but not take the urgent actions needed to drastically reduce emissions, and to continue polluting and destroying land. People know more about the climate and recognise that we all have to change our behaviour if we want future generations to thrive.

So many people around the world are already being affected by climate change, by the wildfires we saw in California and Europe last year, increasingly severe flooding and droughts. But I think we ignore a lot of what is happening, especially because those most affected live in developing countries, it is dismissed as “third world problems”. I recently learnt the term ‘climate racism’ and I feel like that is exactly what it is. People value lives from Africa and communities of colour less, so it doesn’t get the same attention as if it were European lives being lost and ways of life destroyed.

I hope that the case against Shell will highlight these issues and that it will bring change. I hope the people most affected by climate change will get justice. 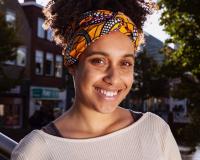 Jessica Effah is from Zaandam in Northern Holland. She is a social work graduate and studying to become a teacher. She is one of more than 17,000 co-plaintiffs taking legal action against Shell.