By Ruchi Tripathi, head of resilient livelihoods and climate justice, at ActionAid

Our world is heating faster than ever before, with this summer on track to become the hottest ever. But this isn’t a heatwave, it’s a climate emergency.

Biodiversity is being lost at an alarming rate, the Amazon – the ‘lungs of the world’ – is burning, and the capacity of soils and oceans to absorb carbon is being tested to the limit by intensive farming and over-fishing.

At the same time, progress towards social justice, equality and ending poverty is being undone. After a decade of decline, the last three years have seen global hunger rising. Now nearly one in nine people do not have enough to eat. Women’s rights are being eroded and access to sexual and reproductive health are under attack in many countries where we work, from America to Tanzania. Environmental and human rights defenders are being demonised by governments globally.

But there is a fight back, an uprising of ordinary citizens, young people, parents, people from all backgrounds, coming together to demand climate action. Recognition that the climate crisis is a result of our current economic system is growing.

Since moving to the UK from Johannesburg last year, I have met many inspirational grassroots activists through my local Extinction Rebellion community and Friends of the Earth group in leafy, Conservative-voting west Kent. Climate activism has gone mainstream. I’ve seen my daughter, who likes to follow the rules, walk out of her school and get an unauthorised absence on her record to join the Schools Strikes 4 Climate, women’s march and anti-Brexit protest.

So far, the gaze of western-based, international media has been focused on the incredible efforts of grassroot activists in the global north who have managed to shift public policy in Europe, forcing their governments to set more ambitious binding targets.

What’s missing are the voices of those living on the frontline of climate change, their heroic efforts to adapt and live with its devastating impacts, and their determined fight for climate justice.

The experiences and expertise of women farmers who are defending our soils, water, forests and producing food for their families while struggling with increasingly severe droughts and flooding are not being heard. Women, due to their traditionally ascribed roles, end up bearing an unequal burden of care responsibilities. Their daily work gathering food, water and fuel is becoming increasingly difficult due to climate change and reduced biodiversity. Girls, who in most communities fulfil the role of collecting water, are missing school as they spend their days searching for cooking, drinking and cleaning water.

Yet a growing body of evidence, including this summer’s landmark report from the Intergovernmental Panel on Climate Change and Land, shows that a major shift to farming methods that work with nature, reduce emissions, empower women farmers and improve resilience to the impacts of climate, is now essential.

This September, our partners, colleagues, supporters and activists from over 20 countries across ActionAid’s federation, will be taking part in the Global Climate Strikes and ensuring the voices of climate survivors are heard at the UN Climate Action Summit in New York. Those who have done the least to cause climate change, but who are already living with the harmful impacts of global warming and extreme weather are demanding justice.

•    We’ll be posting climate survivor stories on our Twitter and Facebook feeds throughout the month, please share with your networks and help us put their experiences at the forefront of the climate justice movement. 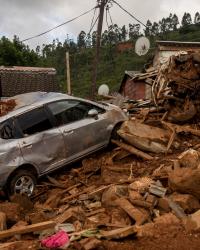