By Harjeet Singh, global lead on climate change, at ActionAid

As the week of global climate action concludes with another wave of exciting protests around the world, I leave New York with two key takeaways.

First, more than six and a half million people striking in record 185 countries from 20th to 27th September have created a pivotal moment in the ongoing climate justice struggle. The United Nations, governments, social and indigenous peoples’ movements, faith leaders, civil society and even scientists now look to youth leadership.

Second, a bolder United Nations, under the leadership of Secretary-General Antonio Guterres, that can now challenge the world leaders who continue to pay lip service and frustrate the climate movement.

At the UN climate summit, Guterres snubbed coal backing nations such as Australia, Japan, South Korea, and South Africa. Big countries like Brazil and Saudi Arabia, who have criticized the Paris climate accord (the latter even attempting to disregard the science) were blocked from speaking. He allowed only about 60 countries which claimed to offer scaled up climate plans. Although countries that responded with the most concrete actions were the ones most vulnerable to climate impacts.

The fabric of this strike in New York was very different to the one I attended back in September 2014. This one not only had a much larger proportion of children, young people and families, but also people of colour and indigenous peoples. The messages on placards and banners were not limited to shutting down the fossil fuel industry or the immediate impacts of climate change. Many echoed causes of the climate crisis, as well as the social injustice connecting them with the dominant and extractive economic system, leading to inequality.

Another striking element this week was #ClimateJustice and #ClimateJusticeNow trending on Twitter along with #ClimateEmergency and #ClimateAction. Young people in the global North and around the world have embraced the climate justice slogan and have been shouting and singing in full steam:

Yet, there are only a handful young strikers who really know what ‘climate justice’ means for poor people and developing countries and how it hinges on the principles of equity.

Our dear friend, Nathan Thanki from the Global Campaign to Demand Climate Justice wrote a brilliant and timely piece - What does Greta Thunberg mean when she says “equity?” to encourage strikers to see beyond the rhetoric.

The young protesters in the Londons, Sydneys and New Yorks of the world need to recognize that their demands from the governments to act on the climate emergency cannot be limited to ‘their future’.

They must realise how rich countries, that are mainly responsible for the crisis, are far from meeting their ‘fair share’ of climate action and shirk their responsibilities to provide adequate money to developing countries.

Developing countries that face climate emergencies, here and now, need finance and technology to cope with climate impacts and green their economies as they take millions out of the vicious poverty cycle.

The climate justice movement in the global South really should look significantly different to how it does in the rich world. While the “Fridays for Future” phrase coined by Greta has gained popularity around the world, the demands and actions in developing nations must reflect the existing local realities of extreme poverty, hunger, pollution and new displacements caused by devastating floods, droughts and rising seas.

Most people in developing nations struggle to make ends meet and see education as a ‘great leveller’ to overcome poverty. Children’s education is one of their top priorities, for which they work hard to pay school fees. These parents cannot fathom the idea of their children skipping school every Friday to strike.

We must find other innovative ways to involve children in learning about and protecting the environment as well as demand that government policies put planet over profit.

The new spirit into the movement created by millions of young people taking to streets to demand climate justice, therefore, must now be localised and decentralised. It needs to create but more importantly find and recognize local leaders – both young and old – who have been putting their lives on the line for years, in order to fight for environmental, social and economic justice. Organising to build and sustain ‘people power’ around climate justice and 'system change' requires hard work, commitment and perseverance.

As someone who was initially reluctant to attend the UN Climate Action Summit, thinking it would be another run-of-the-mill summit, I am now going back home inspired and energised to continue to fight. And fight harder. 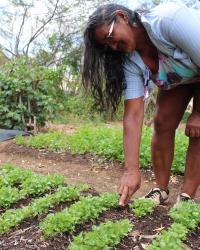