"The elephant in the room" has joined me – literally - at the UN's high-level meeting on Finance for Sustainable Development and the Climate Crisis. I wish it could take the shape of dollar bills for, among all the glossy words used by world leaders to describe their commitment to the SDGs, the Climate Crisis and the eradication of poverty - scarcely a word is spoken on how to finance promises. In fact, most heads of states from the rich countries left New York before this high-level dialogue on financing development started. This leaves the most vulnerable people on the planet behind despite the ambition articulated in the SDG agenda to ‘leave no one behind’.

Climate change is adding to the challenge. Three things are true about the climate disaster and its impact on the poorest countries:

1.    It is already a reality in these countries, in the form of drought, floods, extreme weather and lost lives.
2.    It increases poverty and increases inequality because it strikes poor people most severely.
3.    It has been created by the rich countries' over-consumption of the planet's resources and the emission of fossil greenhouse gases. The 10% richest on planet account for 50% of greenhouse gas emissions, while the poorest 50% - 3.5 billion people - account for only 10%.

What of solutions? Presidents and representatives from developing countries demand multilateral cooperation against tax evasion. According to the IMF, developing countries lose about $ 200 billion a year from large corporations profit shifting into tax havens alone. They demand an end to tax havens, to money laundering and to a global system - facilitated by the largest banks and the financial sector - which plunders them for resources they could otherwise spend on development, health, education and adapting and mitigating climate change.

Pakistan's President Arif Alvi made it clear: "There is so much greed. Why do we allow countries that systematically allow tax evaders to hide our money?”

It is fascinating to hear how the rhetoric and analysis that we have had as civil society for more than 10 years has been adopted and adapted by developing countries. It is a bellow from below - demanding dismantlement of an extremely unfair economic system that works only for the rich, not for the many and the poor.

There is a clear understanding amongst developing countries of the need to strengthen their own tax systems and ability to mobilize resources for development. But to do that rich countries must act. Change must be through multilateral cooperation to stop tax havens, money laundering and multinational corporations' tax dodging.

As we wait and hope that Denmark #dkaid with Solidarity Minister Rasmus Prehn will join forces with his colleagues from Norway and Sweden and together put their energy into stopping the tax evasion, which may be the biggest obstacle to achieving the SDGs - we can draw hope from the fact that, at least in the developing world, leaders acknowledge the elephant in the room.

We can easily find the money to finance the SDGs, but rich countries and large corporations must take responsibility for concentrating wealth and income and for driving the planet towards a disaster with their unsustainable production and consumption patterns. They must stop the financial alchemy and acrobatics that are happening at the expense of ordinary people's livelihoods. 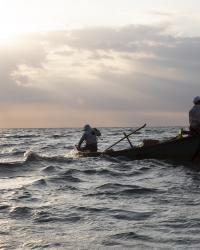