ActionAid is deeply concerned about the situation of women, men, boys and girls that are trapped in the Turkish military operation that started on October 9th in northeast Syria, after the announced US withdrawal from the area.

The United Nations as well as Syrian and international humanitarian organisations present in north-east Syria are reporting that hundreds of thousands of people are being displaced from their homes and that civilians are being killed since the military operations started, which have included air raids and use of artillery in densely populated areas. Humanitarian responders on the ground also report that critical health, education and water services have been interrupted.

As in the rest of the country, the people of north-east Syria have already endured years of conflict, with many being repeatedly displaced and having suffered enormously both physically and psychologically. ActionAid is calling on all parties to this conflict to immediately cease hostilities and start urgent dialogue, with the support of the international community. As part of the Syrian INGO Regional Forum (SIRF) ActionAid alongside 72 other international nongovernmental organizations have signed a public statement reminding all parties to this conflict to ensure free access for humanitarian organizations to provide vital assistance to civilians and called for donor governments to be ready to provide adequate and flexible funding.

Turkey, Jordan, Iraq and Lebanon collectively host 5.4 million Syrian refugees. Turkey hosts the highest number of Syrian refugees in the world, with insufficient support from the international community. ActionAid is not operating in north-eastern Syria or other parts inside Syria, but we are supporting refugees in the region, in Lebanon and Jordan.

ActionAid and its local partners’ daily work with Syrian refugees shows that the support and reinforcement of their rights, while working in social cohesion with host communities, remains crucial to contribute to a durable and fair solution to the crisis. ActionAid is concerned that one of the objectives of the military operation is to facilitate the return of large numbers of refugees to Syria. Refugee hosting countries should ensure that all refugees continue to enjoy their lives in safety, security and dignity.

Our response to the Covid-19 pandemic 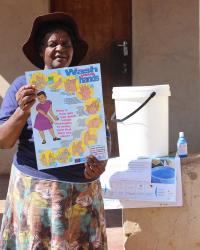