ActionAid responds as the U.S adminstration hosts a side event at the UN climate summit in Katowice, Poland, to promote the use of 'clean' coal and natural gas.

“The Trump team’s side event on coal is yet another reminder that this administration is intent on putting the short-term interests of its cronies in the fossil fuel industry, above the long-term prosperity and survival of people in the U.S. and around the world.

“Climate change is real and it’s happening right now. People in the U.S. and around the world are already suffering its impacts, as communities in California devasted by wildfires this summer know all too well.

“The Trump administration has already indicated it will pull out of the global deal on climate change, ignoring warnings from the world’s leading scientists that time is running out to avert climate catastrophe.

“Governments must not allow this and cynical stunts with the coal industry to derail progress towards agreeing the measures needed to limit global warming to 1.5°C and protect all of us from increasingly frequent and severe droughts, floods, extreme heat and poverty.”

An increase in global coal use is already pushing world carbon emissions to reach an all-time high this year, according to a report published last week by the Global Carbon Project. 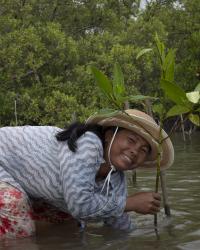