Environmental defenders and climate activists in Brazil have delivered a petition to protect the Cerrado biome – signed by more than 560,000 people – to their National Congress.

The petition is part of the National Cerrado Defence Campaign for an amendment to the constitution so that the Cerrado and Caatinga biomes can be made into National Heritage Sites. With under 3% of Cerrado currently protected by law, this would help preserve the environmentally vital biome from deforestation and intensive farming.

ActionAid Brazil is among over 50 civil society organisations and movements that have come together for the campaign.

The Cerrado is a vast savannah that once covered 772,204 square miles – an area bigger than the UK, France and Germany combined. It is not as internationally recognised as the Amazon, but it is also renown for its amazing biodiversity. The biome supports more than 10,000 plant species, more than 900 bird and 300 mammal species. It is also vital to water supply across the South American continent and is often referred to as “Brazil’s water tank”, supplying waters that generate the electricity used by nine out of ten citizens.

Its deep-rooted plants and soils also store huge amounts of carbon, making its protection key to preventing climate chaos. But it is under increasing threat from agribusiness and the expansion of industrial soy and cattle production. Despite its environmental importance, it is one of the least protected areas of Brazil.

Maria de Fatima Barros, a leader from the Quilombola communities, who are descendants of escaped slaves, presented the petition to Congress.

“To fight for the Cerrado is to defend our bodies, our lives and our water,” she said. “We live in an emblematic moment, with many threats and public policy cuts, but we must not forget that we are the voice of this biome and therefore we cannot let our territories, lives and natural resources crumble.”

Nilto Tatto, a member of Congress and coordinator of the environmental group Parliamentary Front, pledged to support the campaign and vote in favour of the amendment.

He said: “The attacks that the Cerrado has been suffering in recent decades, directly compromise the preservation of our forests and water production.”

The petition was also handed over to Rodrigo Agostinho, president of the Environment Commission, and to Joenia Wapichana, the first indigenous woman to become a congresswoman in Brazil. Joenia took the petition to the plenary session and delivered it to Rodrigo Maia, President of the House.

The National Campaign in Defence of the Cerrado will continue to push for the change in law that will guarantee the Cerrado and Caatinga National Heritage status. Their goal is for the petition to reach 1 million signatures, visit this page to sign and support the campaign.

As rich countries shirk responsibility for the climate crisis, families in Malawi are boiling mangoes to survive 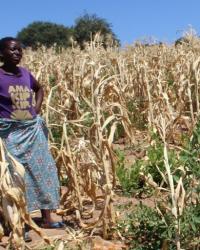