Sometimes, conservation can be used as a cover for landgrabbing

Mbulia Group Ranch lies on the eastern boundary of Tsavo East National Park, Kenya, and currently part of it is fenced off as a wildlife conservancy, ‘the most critical dry season habitat and migratory corridor for wildlife in the Tsavo Conservation Area’. However, this appealing description disguises a human rights abuse. Many residents on the land have been excluded from decision-making about community resources with serious consequences for lives, livelihood and property. 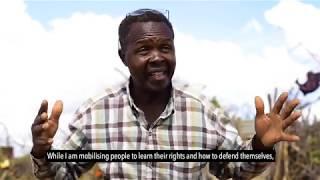 Sometimes, conservation can be used as a cover for landgrabbing. This story, of the Mbulia Group Ranch in Kenya, is a striking example.

Resistance to expropriation of land has been met with arbitrary and malicious arrests, harassment and violence. However, with solidarity, support and training, the understanding of both for communities and officials on changes to community land ownership has been improved. The worst of the abuses have been halted while longer-term change is negotiated. The example of the Mbulia Group Ranch has also led to a neighbouring land grab being thwarted.

Even when the state apparatus of police and courts are used to intimidate and suppress access to rights, civil society can fight back against entrenched interests. Despite violence, arrests and displacement, the community has been supported to demand their rights to their community land after decades of exclusion.

In 1968 the Group Representation Act introduced the concept of a Group Ranch as, ‘a livestock production system or enterprise where a group of people jointly own freehold title to land, maintain agreed stocking levels and herd their livestock collectively which they own individually’. The honourable intention was to protect the land of communities who mostly depend on livestock for their livelihood from encroaching expropriation of land for agriculture and other exploitation. However, the management structure was easily captured by minority interests and largely excluded women from participating in decision-making. In Mbulia what was originally communally owned land became a private group ranch managed in the interest of a small elite group.

In the case of Mbulia Group Ranch, the area was registered as a Group Ranch and then part of it leased to an investor for a wildlife conservancy without the knowledge or consent of most of the community. This has resulted in evictions and insecurity for around two thousand people and serious harassment of those who protest or try to protect their rights. Kangemi, a village with more than 200 houses was completely destroyed to make way for the conservancy. People have effectively become squatters on their own ancestral land and women, in particular, have been excluded from sources of food, firewood, water and other natural resources. The dispute has become a focus of competing narratives: one, the successful establishment of essential wildlife conservation measures and reduction of human-wildlife conflict; the other, of human rights abuses and a fight for justice.

In May 2016 the long-simmering situation came to a head when four community members were arrested accused of incitement to violence. They appeared in court the next day charged with malicious damage to property. That night the pregnant wife of one off the accused was beaten when armed intruders broke into their house.

David Mwamburi emotionally recounts: “That day I was taken to court and detained, I tried reaching my wife but her phone was off.  When I called my mother and noticed she was being evasive, I reached out to a friend. She told me unknown people had attacked my wife at night and she was only saved because her mother’s screaming raised the alarm.”

Martha Kalema reports her experience: “After he was detained we were left alone at home and that night unknown people attacked me. At the time I was pregnant with my son. If my mother hadn’t screamed, I don’t know what would have happened. The attackers kicked me, beat me and tried to drag me away. I suspect they were hoping to interrogate me about my husband’s activities and then kill me.”

In the following weeks police also came after several women from the community, two of whom narrowly missed police intrusion into a meeting of ActionAid Kenya partner and women’s group, Sauti ya Wanawake. More community members, including Sauti member Grace Mjomba had to leave their children behind and flee their homes to shelter in the bush for fear of violence and arrests. The arrests and harassment were considered as malicious harassment as no evidence was ever produced or convictions gained. Government agencies and the security forces were acting to further the interests of a small group of people without regard to legal rights or processes. The acts described as ‘malicious damage’ resulted from people finding themselves enclosed within fencing without their consent and opening it up to allow movement of themselves and their livestock; those of incitement to violence and trespass from a refusal to be displaced. The Group Ranch committee also used local youths as a militia to harass opponents.

Faced with this alignment of powerful interests against the community, ActionAid has partnered with an alliance of CSOs to respond to the situation on several fronts. A gender audit of Group Ranch membership and representation discovered that on six Group Ranches in Taita Taveta County, only 7% of members were women, two Group Ranches had no women on their committees and the other four only had 10 women representatives between them. None of the Group Ranches anywhere near meets the Constitutional guidelines on gender discrimination. 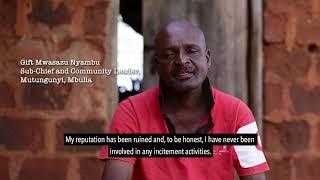 The new (2010) Kenyan Constitution and the resulting 2016 Community Land Act has altered the relationship of communities to land, including the repeal of the Group Ranch Act. But knowledge and understanding of these changes is limited and has not been acted on by those with control over land. Community mobilisation and paralegal training, especially for women, has been undertaken to improve understanding of rights and the capacity to challenge present and historic injustices.

Makrina Mwamburi from Taita Taveta Human Rights Watch confirms that: “Together with ActionAid we saw there was a need to sensitise people in this area on their land rights so that they are empowered to fight for their land."

The police, in many cases, have also not taken on board the constitutional changes and so training and regular contact sessions have helped to bring change to police attitudes and behaviours. Different approaches, including theatre, have been used to impart information and promote discussion. Engaging the media to report on these matters has also raised the profile of the issue.

Meanwhile, a community protection scheme has been implemented at Mbulia to prevent the return of harassment of the community. A nominated person in each village is responsible for monitoring and reporting incidents and risks. There have been no further arrests through 2018. However, the uncertain situation has had, and continues to have, a serious impact on peoples lives.

James Mzungu, who has fought the evictions all the way and was arrested and taken to court says: “The way this place is underdeveloped is not because we are too poor to build better. No one wants to invest heavily and then have all their property damaged, like it happened to residents of Kangemi.”

Gift Mwasazu Nyambu, sub-chief Mutungunyi, also arrested and imprisoned declares, “My reputation has been ruined and, to be honest, I have never been involved in any incitement activities… All the plans I had for my family have been derailed.”

Perhaps the strongest demonstration that positive change is happening is that a the community resisted an attempt by an Area Chief to lease community land for a large-scale investment on a neighbouring ranch. The Chief had registered a Group Ranch illegally, without their consent. The greater understanding of rights concerning land empowered the community to take action. The chief was arrested and imprisoned and the land deal prevented.

Mbulia Group Ranch is one example of many conflicts over land across Kenya. At a national level there is CSO cooperation to push for the speedy implementation of guidelines that should bring finally bring into practice the provisions of the 2016 Community Land Act. The National Land Commission can then initiate investigations into present or historical land injustices and recommend appropriate redress. Unconstitutional and unfair leases can be terminated or renegotiated to secure the interests of the community. Meanwhile in Mbulia, James Mzungu insists: “Although they say I am the threat, I promise to continue fighting, until we get our land.”

This case is also a striking example of how ‘conservation’ can be used as a smokescreen for land grabbing to the advantage of a small group and against the interests of the broader community. This has a resonance in many parts of central, eastern and southern Africa where communities have been displaced in the name of conservation and animal welfare. Important as these issues are, they should only be pursued with the consent and involvement of the people they affect and never be used as an excuse for human rights abuses and profiting from displacement.